BOCHUM WITHIN THE RUHR METROPOLIS

The Ruhr region’s 5.1 million inhabitants make it the largest urban agglomeration in Europe. The region’s cities are in close proximity to each other and there is lively interaction between them. Bochum is located in the middle of them all, and is therefore at the heart of the Ruhr metropolis. The city has a high-capacity travel network that ensures that it is fully connected to the German, European and world markets. This represents huge potential, as one in three EU citizens lives within a radius of just 500 kilometres.

Bochum, situated in North Rhine-Westphalia, is a regional centre, and with 371,000 residents (as at: 31/12/16) it is the second largest city in Westphalia and the sixteenth largest city in Germany. The urban municipality is part of the administrative district of Arnsberg. Based on a proportion of green areas amounting to 10.9 percent (excluding forest), Bochum is one of Germany’s top ten major cities.

Since the founding of Bochum Marketing GmbH in 2001, the City of Bochum and businesses have taken on the important task of marketing the city as part of a collaboration based on trust. The local authorities and just over 70 businesses, associations and institutions each hold one half of the shares in the company whose task it is to positively influence the image of Bochum. In consultation with residents, ideas and actions are initiated and implemented to make life in Bochum more attractive and encourage investors, businesses, specialists, tourists, students and customers to come to Bochum. The aim is to make the perception of the city, which has always been able to successfully adapt to change into being, above all, a hotspot for live culture, a talent pool in the Ruhr region, a shooting star of knowledge and a city with a lifestyle.

There is nowhere that the character of the Ruhr region can be more concisely experienced than in Bochum. The visible industrial past, the lifestyle of a vibrant city and its importance as a place of theatre and performance all combine to create a unique profile.

Its cultural life is one of the particularly exciting aspects. Every year highly-acclaimed musical and theatrical events — such as the Ruhr Tent Festival, Bochum Total, Urbanatix, the Ruhr Triennial Arts Festival or the Ruhr Piano Festival — draw several hundred thousand visitors to the city. Regular shows at the Starlight Express Theatre and performances by the Bochum Symphony Orchestra (Bochumer Symphoniker) or Bochum Theatre (Schauspielhaus Bochum) provide the best in live entertainment. This city in the Ruhr region has emerged as one of Europe’s richest cultural landscapes.

LATE NIGHTS IN THE BERMUDA3ECK 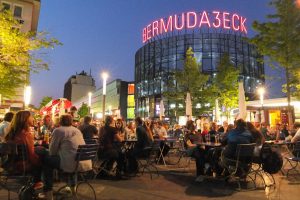 The Bermuda3Eck (Bermuda Triangle) district, whose reputation extends far beyond the city walls, offers a world of gastronomy with more than 80 places to eat or drink. The trendy district situated between Südring and Konrad-Adenauer-Platz offers more than 7,000 seats to eat and drink indoors and around a further 3,000 seats outdoors to accommodate the 3 million plus visitors each year.

The „genuine“ Dönninghaus cult sausage can also be found in the Bermuda3Eck. Visitors flock to this Bratwurst establishment to enjoy the unforgettable original curry sausage sung about by Herbert Grönemeyer. 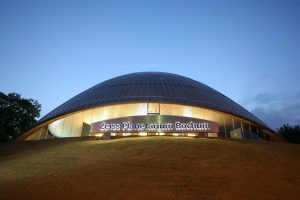 Zeiss Planetarium Bochum was ranked in first place out of 27 planetariums in 2016. Last year, 248,091 people visited the planetarium located on Castroper Straße – this was more than ever and well over 6,000 more than in the previous record year of 2015. This long-standing building, which has been open since 1964, draws visitors from the whole region and is also of major national importance, as more than 85% of visitors are not from Bochum. The Zeiss Planetarium Bochum ranks among the world’s best planetariums and is equipped with VELVET full-dome projection. The eight projectors ensure a huge digital motion picture can be enjoyed. The VELVET system generates high-resolution full-dome projections with 4k resolution. The Zeiss Planetarium Bochum has been equipped with the world’s latest full-dome projection system since 2010. In the traditional planetarium centre, the world’s most advanced star projector, the Zeiss Universarium IX, has been in use since 2000, where the stars look as breath-taking as they do in real life. 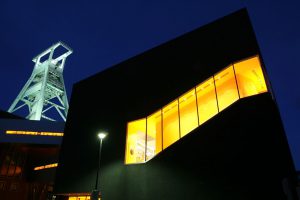 With more than 400,000 visitors a year, the German Mining Museum is one of the most successful museums in Germany and the biggest of its kind in the world. In a rope-haulage simulator, visitors can experience for themselves what it’s like to travel down 1,200 metres below the ground in a pit cage. The 2.5 kilometre long viewing mine and the extensive exhibition above ground are complemented by mining research and economic management of cultural artefacts.

With more than 56,000 students (as at the winter term 2016/2017) studying at nine different universities, Bochum is the largest university city in the Ruhr metropolis. Bochum is one of the top five university cities in North Rhine-Westphalia and is among the tenth largest in Germany (Source from IT.NRW).

UniverCity Bochum is a closely linked network, whose aim is to further promote Bochum’s reputation as a city of science and education. UniverCity is a joint initiative of the City of Bochum, Bochum Marketing GmbH, the Chamber of Industry and Commerce (IHK) of the Central Ruhr Region, the Academic Promotion Association (AKAFÖ), the German Mining Museum and seven of Bochum’s universities. For more information, visit: www.univercity-bochum.de .

Your contact for all information on Bochum is Bochum Marketing GmbH – Touristinfo, Huestraße 9, 44787 Bochum. Tourist information services offered include travel offers, city tours, souvenirs, advance ticket sales for concerts and sports events Germany-wide, conference and meeting services as well as free advice and an accommodation service. For more information, visit www.bochum-tourismus.de or call +49 (0)234 963020. As a partner of Mein Fernbus FlixBus, tickets for intercity coach lines can be bought at the tourist information office or on its website. Bogestra tickets can also be purchased for use on public transport within the VRR (Rhine-Ruhr) transport region. 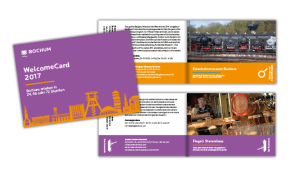 The Bochum WelcomeCard is the cheapest and easiest way to explore and discover Bochum. The card can be used to obtain numerous discounts at cultural and leisure facilities, as well as in shops and restaurants. It can also be used on the local public transport network. The Bochum WelcomeCard has two parts: the travel ticket and the accompanying book with coupons. It is available for individuals or groups (of up to five) for 24 hours(12,oo€), 48 hours (19,00€) and 72 hours (26,00€) and can be purchased from various points of sale – from the Bochum Tourist Information, selected hotels or from the Bogestra MobilitätsCenter in Bochum’s main train station.

Further Information are available at the homepage of the Bochum Marketing GmbH: http://www.bochum-tourismus.de/de/service/ticketshop/welcomecard/index.php 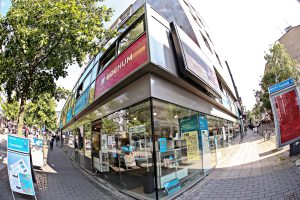 This site was constructed in cooperation with Bochum Marketing GmbH.